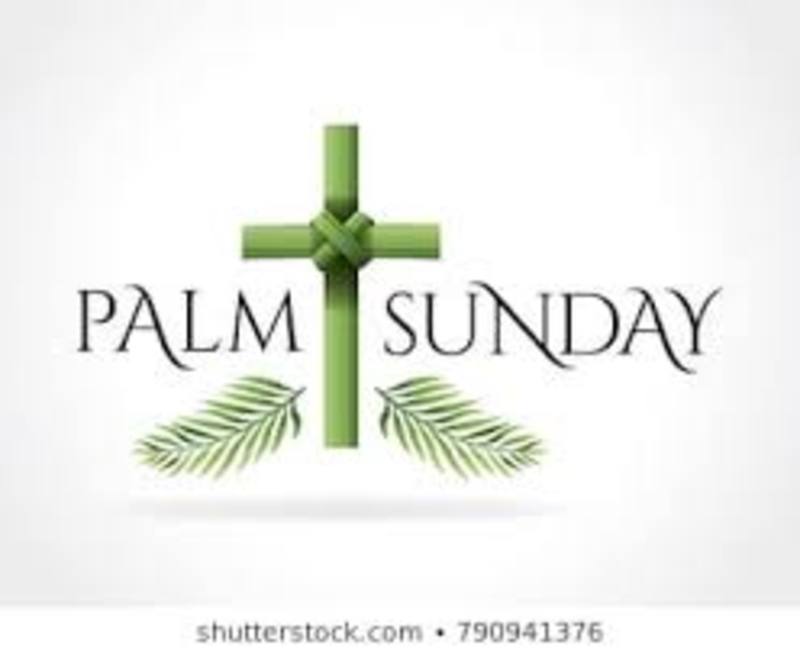 Palm/Passion Sunday, April 10, 2022  Processional Gospel Luke 19: 28-40                                                           Passion Gospel Luke 22: 14 – 23:56 Grace, peace, and mercy be with you from Creator, Redeemer and Sustainer. Amen.  Welcome to Holy Week. Today begins the central week of the liturgical church year. In the suffering and death of our Lord, we glimpse the sacrificial love and profound compassion that God has for us. In the mystery and majesty of the resurrection, we proclaim the new life God offers to us and the eternal promise God makes with us. We have just commemorated Palm Sunday and our Lord’s last entrance into Jerusalem. As he made his way into Jerusalem, riding on a colt which had never been ridden, St. Luke reports that “the whole multitude of the disciples began to praise God joyfully with a loud voice.” It was a joyful occasion. The people were filled with excitement at the prospect that God’s Messiah had finally arrived. In Luke’s version, the crowd places their coats on the road, and sings hymns of praise as Jesus rides by on a young colt. Matthew tells us that Jesus is riding a donkey, and people are laying both coats and branches on the road. Mark tells us they are leafy branches. It is finally John who describes the people as laying palm branches on the road, and that is what gives today its name. Regardless the details, what happens is clear. The people are ecstatic. They sing, and shout, and chant, and create their version of a red carpet welcome. And look what they see: he comes riding into town on a humble steed; a young colt. Not exactly an imposing figure! Contrast this with the images that we have been seeing on the news everyday since the end of February. Watching the terrible fighting and military might of Russia and Ukraine. The images of people killed in the street and buildings destroyed by missiles and bombs. It couldn’t be a stronger contrast with the image of Jesus on Palm Sunday, riding on a colt as he entered the city of Jerusalem. Unlike those awful images of war that we have been seeing, Jesus isn’t trying to strike terror in the hearts of those who see him. Jesus isn’t trying to out-Roman the Romans. Instead, his humble appearance is quite deliberate: it will remind his first century followers of these words from the prophet Zechariah:  Rejoice greatly, O daughter Zion! Shout aloud, O daughter Jerusalem! Lo, your king comes to you; triumphant and victorious is he, humble and riding on a donkey, on a colt, the foal of a donkey. Jesus is signaling, with this image, that he is the one envisioned by the prophet Zechariah some five hundred years before. Triumphant, Zechariah says. Victorious, yes. Yet humble: riding on a colt. With this striking image, Jesus declares himself to be the king. The reason for Jerusalem to rejoice; the reason to shout out loud. The image of Jesus during this last week is an important aspect of today’s story, perhaps the most important aspect of this story. In the Gospel lesson, there are two verses which strike to the heart of who Jesus is and what his ministry means. As they nail his body to the cross, with a criminal hanging on either side of him, Jesus looks at those who are crucifying him and cries out, “Father, forgive them; for they do not know what they are doing.” It is a stunning glimpse of the radical forgiveness which stands at the heart of Jesus’s ministry. Even those who would violently oppose everything he has done, and everything he stands for, provide opportunities for Jesus to share love and grace and forgiveness. We see this again, nine verses later. When one of the criminals hanging next to him defends him, Jesus offers this promise: “Truly I tell you, today you will be with me in Paradise.” Guilty by his own admission, this criminal turns to Jesus, and Jesus extends to him the same welcome into God’s reign that you and I have received. Even with his dying breath, Jesus honours the mission he has come to accomplish; the mission of forgiveness. The mission of new beginnings. The mission of new life. This mission of abundant, over-the-top love. He is not the Saviour the people of Jerusalem expect. Certainly not the one they envisioned when they opened the gates and welcomed him in. But he is the Saviour they need. And the one we need, as well. In the events of this week, God’s deep and radical love for us is on display. God’s willingness to give even life for us is on display. God’s intention to welcome us into sacred love, just as we are, is on display. Let us honour God, with our worship and prayer this week. And as we do so let God capture our hearts and our lives. Let it be so. Amen.